We're open 24/7 and ready to help you during COVID-19 with Sanitization Solutions. 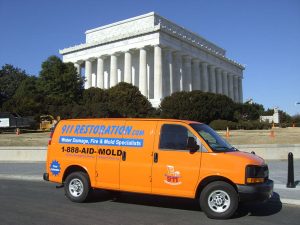 When many of us think of Washington D.C., we are reminded of the history and myths that surround the formation of our country’s capital. Though most historians agree that George Washington’s famous boyhood “I cannot tell a lie” speech is likely the stuff of myth, what can be truthfully said is this: if our first president was alive and standing on Pennsylvania Avenue today, he would warn locals that sewage damage can harm homes, make people sick and he would likely agree it reeks as strongly as the idea of oppressive British rule.

How Does Sewage Blockage Occur?

Just as there are a number of artifacts at the Smithsonian Museums, there are an equal number of reasons for why sewage blockage happens. According to professional sewage backup companies, the most common reasons include clogs, tree roots, and collapsed or broken sewer lines. The only paper product that should go down your toilet is toilet paper, single or double ply. But sometimes people flush diapers, women’s sanitary items, crumpled up audit notices from the IRS, and a number of other things that don’t belong down the porcelain throne. Remember, your toilet is not a trash can, so just flush your own waste down there and pitch the other items in a garbage bin (preferably one outdoors).

Another common cause for sewage backup is due to grease disposal. Never pour grease down your drain or toilet because it will cling to the sides of the pipe and harden creating a backup much like the plaque that builds up in a person’s arteries who eats Burger King every day.

How can Tree Roots Cause Sewage Blockage?

When poet Joyce Kilmer wrote, “I think that I shall never see a thing as lovely as a tree”, she clearly wasn’t thinking about tree roots seeking out sewage pipes for moisture. Though she follows this sentiment with, “a tree whose hungry mouth is pressed against the sweet earth’s flowing breast”, homeowners who have suffered sewage backup and black water spills may have had trees that pressed their hungry mouths to the flowing breast of a sewage pipe. As tree roots seek moisture they can grow into your sewage pipes and puncture, crush, or cause blockage within.

How do Sewer Lines Collapse?

Many of the gorgeous homes that grace the streets of Washington D.C. are older and steeped in history, and as such the plumbing is likely just as old with a history all of its own. Plastic sewer pipes are today’s norm, but if you have an older home there is a good chance you have cast iron or clay pipes that can break over time and cause sewage backup and nasty spills.

What Should I do when I have a Black Water Spill?

Black water is a vile stew jam packed with viruses and bacteria, so be sure all family members and pets are safely removed from the contaminated area. Then call a certified sewage cleanup team to respond quickly and restore the area to its previous condition. These professionals have the needed HAZMAT suits to protect themselves from bacteria, and the industrial strength products needed to clean and expel every germ. They also have industry-leading drying equipment to ensure all moisture has been removed so mold and rot won’t form in your home.

Treat your toilet as delicately as Thomas Jefferson treated the Declaration of Independence when he drafted it in 1776, and your potty chair will thrive prosperously just as our great nation did, and as it strives to do today.